I felt rushed since I came back from my shakedown trip. I had to do some maintenance on the bike, finalize different things on my gear; but more importantly, I needed to spend some time with people close to me. It has literally been a race since Christmas to get everything ready for the trip. I would spend almost all of my free time alone in the basement working on my stuff. That being said, I wanted to spend a few more days with my family and close friends before I left. I stayed 4 more days before leaving on Thursday night.

I have been apprehending this moment for a while. I realized that I was not the only one… I wanted my parents to sign my map before I left so this is the first thing we did. We then took a family photo with the bike behind our house.

My mom signing for QC 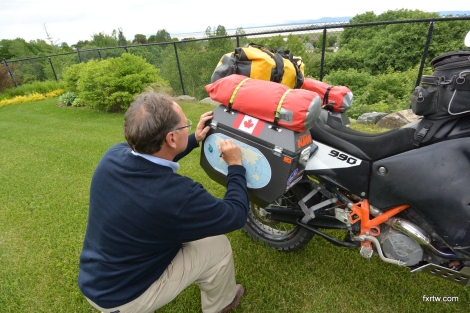 My dad signing for QC

When came time to leave, I felt like they were all thinking it was the last time they were looking at me. I had not been thinking much about that as I am convinced that I will see them again. It was quite an emotional moment as I listened to their advice and fears and acknowledge them as they were real. There was not much I could say to make them feel better… As I prepared this trip for the past year, there were so many task and obstacles to go through. As much as I saw their fears as something I needed to overcome with organisation, safety and communication before; I was now seeing them as a manifestation of how much they care about me.

I had a couple hour ride to my first stop : my grand-parents’ house. Before we moved when I was 12, we would visit them very often. After that, I would see them only a few times a year.  My grand-father Dominique is actually really good at building or fabricating just about anything. He has been reading my blog to learn about the modifications I did to the bike and I was happy to show him physically. I felt bad about arriving there around 9.30pm. It took me longer than I anticipated to leave my house. They were very welcoming as usual. We chatted just about anything until midnight. My grand-father and I watched some motorcycle crash compilations and chatted about potential risks from other drivers. Some of these crash scared me big time.

I had to leave early the next morning as my mom and sister were leaving for Turkey from an airport nearby and we planned a meeting with my other grand-father Marcel and my uncle before takeoff. We woke up an hour late and I needed to fix one of my blinker that came loose for some reason.  After a quick tour of the bike and finishing the repair, I ended up leaving almost 2h late. We decided to meet at the airport instead of the restaurant. In my hurry to leave, I unfortunately forgot to take a picture with my grand-parents in the morning.

They were all waiting for me when I arrived at the airport 45 minutes later. Once again, I did a quick tour of all my gear with my grand-father and we chatted for a bit. My mom and sister had to leave for their flight so we went on and wished each other happy travels. I think it was a good thing that they were also leaving!My uncle Jean has been very helpful in my trip planning. He has traveled pretty much all over the world ad gave me a good perspective of what were the most interesting places to visit. I then had to leave as I was having lunch with a friend from college.

Tony and I used to hang out all the time when I was in Ottawa. Then we completed our degree and lost contact. It was cool to catch up with him. He and his girlfriend are actually getting married on October 25th. It’s too bad that I won’t be able to make it…

I then rode from Drummondville to Ottawa in the afternoon. I did not take any pictures between my house and Ottawa as the road was very familiar. One of my friends (Sophie) invited me to be part of a small pub crawl on glowing bicycles. It then became my deadline for departure. I was sleeping at my great friend Martin’s place. Sophie kindly dropped a bike for me there so that we could join her in the evening: Thanks Sophie!

I spent some time with Martin before we headed out downtown. We decided to wait for the bike group at one of their stops so that we could get something to eat. By the time we ate our sandwiches, three of our friends showed up. Daniel just happened to ride by on his bike and Marc-André and Maurie drove up from Quebec City for the weekend. A few minutes later the bike group arrived with more friends. We spent the night at Glow Fair on Bank St. where they had bands and glowing people.

The next day was Christelle’s (Martin’s girlfriend) dragon boat competition in town. We started the day with some homemade pancakes by Martin. We then all drove up to the beach to cheer. It was a beautiful day and it went by very quickly. Christelle and her team set new personal records and were able to position themselves as 2nd in their category! 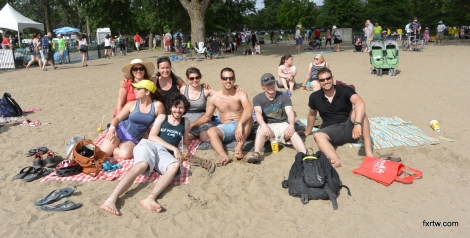 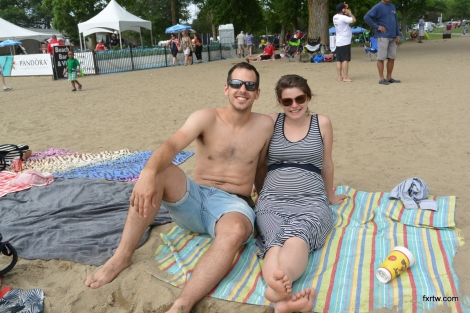 Marc-André and Maurie were very helpful during my preparation. They are expecting their first baby boy in November!

New couple on the block

We then drove up to Christelle place before heading downtown. There, my friends improvised a short champagne ceremony for my departure:

We then headed out to Sparks St. where the Ribs Fest was taking place for the weekend. There we met another couple of friends (Tony and his girlfriend Eugénie) that drove up for the weekend. We had a few different racks of ribs to compare and went to a pub to get rehydrated. There we had a few drinks to all the great events that were coming up in everyone’s life and we ended up calling it a day. 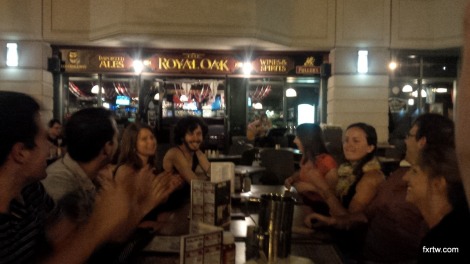